With Twitter in its apparent death throes, a lot of people are thinking about alternatives. My favorite alternative is the humble blog. If Twitter is the "public square" (where people in stockades yell at each other), blogs are smaller. Cozier. Nicer. Like taverns.

Here are some of my favorite RPG blogs re-imagined as taverns. I anticipate this will be a series, but to chunk the work into manageable pieces, I'll only do five taverns at a time. 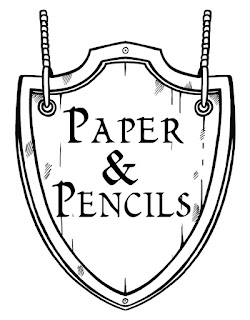 A solid, well-established tavern that occupies an old scriptorium (hence the name). The books lining the shelves that define the nooks, private dining rooms, and common areas are enchanted to speak their contents aloud.
Proprietor: Nicholas Link "Skywalker" Whelan is a happy little feller: a dwarf sporting brightly colored socks and suspenders. (His epithet "Skywalker" is so given because he walks under the open sky, a prospect that terrifies many of his subterranean kin.) N. L. S. Whelan is as generous with his time and coin as he is ferocious in his opposition to monstrous elements.
Sights: The tavern has grown sprawling thanks to its venerable age, with more nooks and crannies than even its proprietor might be aware of. Fire is strictly forbidden, but embermushrooms provide a consistent warmth and soft golden glow.
Sounds: "The scene is built on friendships. Meeting new people and talking about games with them is the foundation of everything we do."
Tastes: The wine cellar is kept well stocked, with many varietals offered.
Rumors: 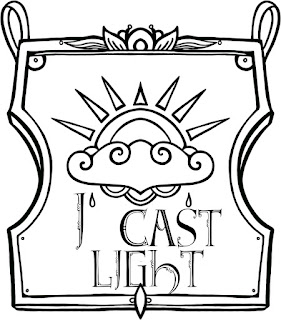 The monastery that houses this tavern was built by an order that once had a flourishing membership. Today, its proprietor, Brother Warren, is the last member of the order. Folks visit I Cast Light to hear tales of the old times, watch Brother Warren perform the ancient rites, and drink the order's traditional metheglins, tinctures, and spirits. Tales of the famous Cleric Brothers are spoken here, with everyone joining in to laugh and embellish the local legend.
Proprietor: Brother Warren is the last adherent to a once-popular but now all-but-extinct religious order. Sometimes called "Monochromatic Warren" due to the black and white robes he wears, but he takes this in good humor. Sometimes it only takes one righteous individual keeping the faith to spare an entire city of St. Cuthbert's wrath.
Sights: A single drum tower fortress. In front of the tavern there is a fountain and statue of The Mother, her hands outstretched, filled with donated coins. The statue glows with fairy fire at night. The tavern's main room is lit with a thousand butter candles. The walls are decorated with tapestries depicting important scenes in the Cleric Brothers lives.
Sounds: "And after reading those books, all of a sudden I had a version of the faith that I could keep in my head. I realized that unlike the advanced sciences, I didn't need to keep a bunch of chats and stats in my head. Instead, I could keep a few relevant numbers and relationships in my head."
Tastes: Traditional recipes of medicinal tinctures that are healthful for the humours when taken in moderation. The gin and tonic is especially good.
Rumors: 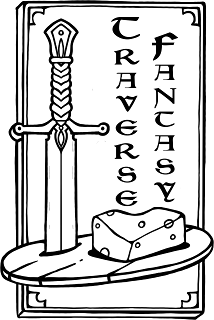 The Traverse Fantasy tavern rests on a forested island that once served as campaign headquarters for the Elven Crusades. The Grey River has reclaimed much of the island, but its proprietor has tirelessly searched the ruins for archaeological notes of significance.
Traverse Fantasy is an academic's tavern. Its proprietor hosts a lecture series on numerous sciences, from history, to thespianism, to mathematics. Much can be learned while drinking in the shade of an apple tree in the ruinous courtyard of the tavern.
Proprietor: Marcia is a striking elven woman who, by all measurements, might be one of the smartest people you've ever met. Unfortunately, she cannot handle her own juice. If she has even a tipple she begins speaking in a language she invented: half enigmatic code, half akashic memory, half ancient tongue.
Sights: The aesthetics of decay. Ruins are beautiful because there's moss following the whorls and spiral patterns of ancient elven menir stones.  Marcia tends these like a Zen garden--not rebuilding, but beautifying.
Sounds: "My goal is to refresh our memories and problematize our preconceptions of a text (or even of a whole genre) that we have taken for granted. The rules are one-to-one with the original, even where there is confusion or falsehood. There is no benefit of a standard vocabulary. There is no one way of doing anything. There is only unadulterated fantasy."
Tastes: Elven predilections tend towards the sweet side of things. The drinks at Traverse Fantasy are sweet (bordering on saccharine) with sweet wines, sangrias, and cordials being prominent.
Rumors:

Save vs. Total Party Kill 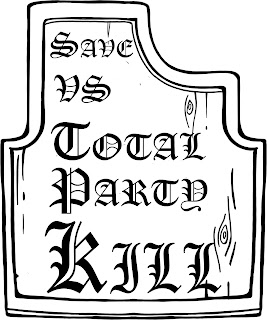 Curious adventurers speculate where the name of this tavern could have come from. The wise don't ask.
One of the oldest taverns in the City, esteemed for its longevity, its nobility, and the friendliness of those who frequent it.
Proprietor: Ramanan Sivaranjan is human knight from the Frozen Wastes to the north. Every year, they bestow upon other adventurers the solemn rank of "Excellent," which earns them bragging rights for-ever more at all the other adventuring taverns.
Sights: Picture a classic tavern. No, more classic than even that. A thatched roof, broad rafters hung with herbs, several large fireplaces, mantles hung with shields of retired adventurers. You can buy a personalized tin mug and keep it there, hung on the wall with the others. Ram has it waiting with your usual when you come in.
Sounds: "When you’re young you have all the time in the world and no real responsibilities. As adults my friends and I had a much smaller window of time to waste. Whether my friends and I used that sliver of time as wisely as we could have remains to be seen, but we certainly had a lot of fun."
Tastes: The beer is an extremely drinkable stout. On the top shelf, there's is a whiskey made of so much peat it practically has a bog body in it.
Rumors: 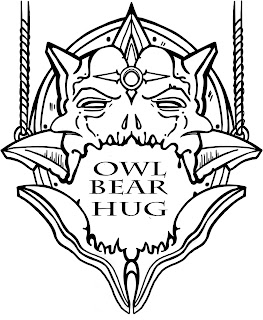 When you go in for a drink, the proprietor mostly just talks to you about his seaborne shenanigans (or picks up on conversation threads you started a day or two ago and had forgotten about).
Proprietor: They call him "Q Pop." No one's sure why. He's a grizzled old campaigner of a thousand battles.
Sights: There's a sort of coziness inspired by cobbled-together elements. The tavern is the alehouse equivalent of a shelf full of mugs from Goodwill. The benches, rugs, taxidermied owlbear heads, horse collars, and collectible decorative plates weren't intended to go together, but have a successful overall effect.
Sounds: "My main goal is to give players the freedom to drive the game wherever they want to go and an environment that is interesting enough to facilitate that."
Tastes: A lot of stiff liquors are poured here but the house special is a brandy old fashioned.
Rumors:

If you haven't yet started a blog, please let me encourage you to do so. I would like to visit.

Email ThisBlogThis!Share to TwitterShare to FacebookShare to Pinterest
Labels: osr