The Rat-Kebab Edition is a ruleset explicitly about trying to scavenge food in the mythic underworld. It's mostly an homage to Dungeon Meshi by Ryoko Kui. The main gimmick is that nutrients = experience points. The rules assume GLoG as your base (since it's so hackable), but you can probably port this onto whatever your D&D flavor of choice is. Include this with something like Veins of the Earth if laying it on thick is your cup of tea. Blend it with Gardens of Ynn or similar if you wanna get weird with it.

As with core GLoG, almost everything uses a d20 rolled against a target number. If the outcome of an attempt is uncertain, the GM determines what ability score most suits the test at hand. The player rolls a d20. If you roll equal to or less than the tested ability score, but above your Fatigue, you succeed.

Everybody starts with the similar stats.

Mastered skills take up two skill slots and must be learned from a master trainer. For example, you learn master lockpicking from the head of the Thief's Guild.

Fatigue is a measure of how tired you are on a 1-20 scale. When you make a test, you must roll above your current Fatigue score but under or equal to your attribute test to succeed.

Fatigue is gained from the Encounter Dice and from taking heavy damage (see below). The GM may also deal out Fatigue for strenuous or unhealthy situations, like wading through a fetid swamp or climbing a mountain during a blizzard.

You lose all of your fatigue when you eat a decent meal. See "Cooking" below.

As the PCs explore the dungeon, the GM rolls the Overloaded Encounter Die. On a roll of 2 (Fatigue), each PC gains 1 point of Fatigue.

Grit is "don't get hit" points. It represents your ability to mitigate actual harm. You use these up first.

You die when you're at - [Constitution] Flesh points.

If you're in the negatives Flesh-wise but not dead, a character can perform first aid. This is a Wisdom check (with a bonus if you have a skill like Leechcraft or Doctor or something). If successful, the character is restored to 1 Flesh and gains a number of Fatigue points equal to the negative value that was healed.

For example, a wounded character at -5 Flesh who is healed through first aid gains 5 Fatigue points.

You can also heal wounded characters through magic, as per usual. Healing magic adds Flesh points, even if in negative totals.

When the party stops to rest in the deep dark dungeon, they have to eat.

Eating rations and preserved food heals all Fatigue accumulated. It stops you from starving. This is the end of their benefits.

A feast is a moment of actual rest in the middle of hostile and hungry darkness. All characters eating a feast heal all Flesh and Fatigue as feasts warm the heart and strengthen the body. Additionally, depending on the make up of the feast, characters might gain Grit, Magic Dice, and temporary or permanent bonuses to their abilities. See "Leveling" below.

To create a feast, you require:

In addition, you must fulfill two of the following five criteria:

A feast must be prepared and then immediately consumed. Leftovers don't count as a feast.

Each monster eaten provides a certain amount of portions. A rat yields about one portion. A minotaur yields about eight. A dragon could feast upwards of fifty adventurers.

If you eat something sentient, you gain a point of The Hunger (see below).

The GM should add together any nutritional benefits from the two ingredients used to make a feast and tell the players the totals for each nutrient category (see below). Decimal totals are rounded as normal; .5 is rounded up to 1, .4 is rounded down to 0.

A nutrient has a maximum score of 5. No matter the combination of ingredients, a nutrient can't go above 5 for any one particular feast.

The GM does not need to elaborate about which ingredient provided which benefit.

Example: After a battle with a basilisk, the party cooks an omelette out of the basilisk's eggs, basilisk bacon, and sliced shambling mound. They cook the omelette in Senshi's wok (cooking gear), flavor it with salt, pepper, and ketchup (spices), over a fire. This fulfills 3 out of 5 of the cooking requirements.

Leveling Up - Eat Your Way to Glory


Levels are a useless concept. Abandon them.

Characters grow and become stronger if they eat well-balanced, healthful, and magical meals. 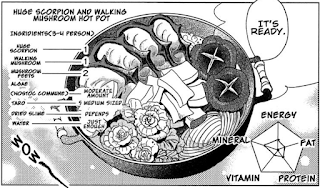 Each character eating a feast may choose to gain the benefits of two nutrients per feast.

Example: The basilisk and shambling mound omelette both contribute their nutritional merits to the meal.

In total, that's 2 Flavor, 4 Energy, 3 Minerals, 4 Vitamins, and 4 Protein. The feast is entirely of exotic foods so the Food Dice equals d6.

When the rules call for it, the players may roll Food Dice (FD). Food Dice are either d4s, d6s or d8s.

If a player accumulates three checks on any stat except for Attack, they may immediately increase that stat by 1. Adjust derived stats accordingly.

When you gain a physical stat increase (Strength, Constitution, or Dexterity), you gain a template in a class of predominantly physical prowess (e.g., Acrobat, Fighter, Thief, Ranger, etc.).

When you gain a mental stat increase (Intelligence, Wisdom, or Charisma), you gain a template in a magical, academic, or weird class (e.g., Wizard, Cleric, Rat Master, etc.).

The GM will make a call for templates that seem to straddle the physical/mental divide (e.g., Muscle Wizard). Maybe you need alternating stat increases, or maybe the GM will set up prime requisites that trigger template gain.

The more delicious the meal, the better disposition the character has. The better a character's disposition, the stronger their willpower and more stalwart their heart.

If the players benefit from flavor: Characters may roll as many FD as the feast's flavor rank.

The more energy a character has, the more resilient they are in the face of adversity.

If the players benefit from energy: After the feast, characters may roll as many FD as the feast's energy rank.

Minerals connect a character to the natural world and the ebb of mana. As a magic-user casts spells, their internal reserves of minerals becomes quickly depleted. In fact, magic-users are at great risk for hypokalemia and hypocalcaemia.

If the players benefit from minerals: Characters gain magic dice (MD) of the same die type and number as the feast's mineral rank. A character can hold as maximum amount of magic dice as they have spell-casting templates. These MD are held until spent and expended through casting spells.

Example: Marsille (Wizard 3, Necromancer 1) currently has 3 MD. She eats basilisk and slime soup, which has a mineral rating of 2. This would yield two d6 MD, to be used whenever she wants to cast a spell. However, since her maximum is 4 magic dice, she only gains one d6 MD from the meal.

If the players benefit from vitamins: Characters may roll as many FD as the feast's vitamin rank.

If the players benefit from proteins: Characters may roll as many FD as the feast's proteins rank.

Example: Following our example above, let's zoom in on each member of the party and see how the feast impacted them.


Only the very desperate or the very wicked eat the flesh of sentient races.

If you succumb to the temptation, you gain 1 point of The Hunger.

At the end of each feast where you gained a point of The Hunger, you make a The Hunger check. Roll a d20.

If you "succeed" on The Hunger check, you become a ghoul. You no longer can return to the surface--the mana up there cannot sustain you. You can no longer eat normal food. You can only digest the flesh of the dead or sentient races.

The Hunger never decreases. Once you're on this dark path, you're on the dark path for the rest of your life.

There may be some wiggle room here. Eating harpies might illicit The Hunger whereas eating harpy eggs might not.

The GM is the ultimate arbiter of what's sentient and what isn't, but they must be forthcoming about this up front. No fair saying, "Ha ha actually slimes are like, super intelligent and secretly altruistic. You just ate the Mother Theresa of slimes" after the fact.

Example: Senshi the dwarf, starving and delirious, is served a stew of dwarf flesh after a desperate and failed delving. He partakes and gains 1 point of The Hunger. At the end of the feast, he makes a The Hunger check. His player rolls a d20 and gets a 15--well above the 1 needed to "succeed" on the check. As such, Senshi remains a dwarf but maintains a permanent point of The Hunger.

Here is a link to a spreadsheet that has the nutritional details of everything in the 1st Edition Monstrous Manual.

Cross-reference this with the Monster Menu-All from Skerples for full-blown info on everything you want to devour (see Sources Cited). 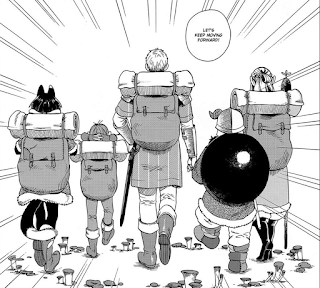 Email ThisBlogThis!Share to TwitterShare to FacebookShare to Pinterest
Labels: GLOG