Games are an exchange of questions and answers. "Can I do this?" "How are you trying to do that?" The GM adjudicates the reality of the world based on this exchange. "Sure, you can climb a tree, no problem" versus "You're trying to climb the tree before GORTHMAK THE UNDECEIVER catches you. Uhhh, roll a d20 and try and beat your Dexterity."

OSR games do not have a de facto resolution system for what a character knows (as opposed to, say, making a Knowledge Local test in D&D 3E). This is a feature not a bug. However, if you would like some guidance for adjudicating what a character knows, you can use this system. Bolt it onto the game of your choice.

What do I know?

Character knowledge follows similar rules to what characters can see. There are essentially two levels of knowledge.

“They are wrought of ithildin that mirrors only starlight and moonlight, and sleeps until it is touched by one who speaks words now long forgotten in Middle-earth. It is long since I heard them, and I thought deeply before I could recall them to my mind.” – The Fellowship of the Ring, J.R.R. Tolkien
Lore represents things that your character knows that you, as the player, might not. This might include a vulnerability of a particular monster, taboos or habits of a foreign people, or the special properties of a particular plant variety.
When you bid lore, you are essentially asking “Would my character know this?”
When a player bids lore, a GM has three potential responses:
You may bid lore a number of times per dungeon turn equal to your Intelligence modifier (minimum 1).

The name of the lore your bid must be part of the question that you ask.
You cannot ask, “Have I ever seen anything like this?” The question is too broad.
You may ask, “Since I know Dragon Lore, are any of the monsters on the bas relief dragons?"

The GM cannot say, “You’re not sure, but you think they might be related to dragons.” If an answer is this vague, the player does not need to spend a lore bid. GMs should simply tell them this hint.
The GM may say, “You know that these are dragons because you’ve seen their iconography before. As an expert in Dragon Lore, though, you recognize that these are fire drakes. These dragons are flightless and live in rivers of lava under the earth. They are famous for their uncontrolled rages.”

You cannot ask, “How do you defeat a dragon?” This question is too broad and too subjective.
You may ask, “Do I know if a drake has any special vulnerabilities?”

My next project for HIS MAJESTY THE WORM is the alchemical system. It will be a product roughly equivalent to the Sorcery is a Sword Without a Hilt.

I have not and will not name this project. 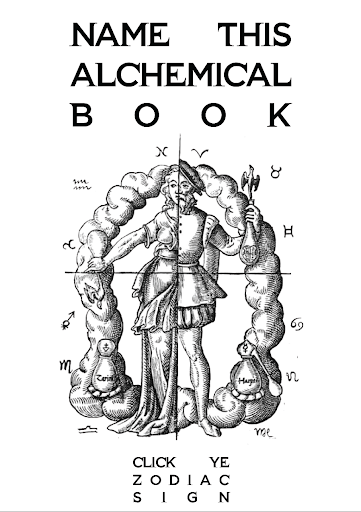 Download the cover to see how it works. Click on the different Zodiac signs to generate different names.

How did you make this?

I tried a lot of different ways to create this effect and found a lot of dead ends, so I might as well write down what worked. I used the Adobe Creative Suite.

(or CCCC for short)

Do you remember Stephen Biesty's Cross-sections books? I had them as a kid. I think there's something very compelling about pictures you can get lost in - ones that demand your attention. RPGs should have more of them.

Anyway, I made a d66 table of level 0 characters for you to use for games like DCC, LotFP, GLoG, or whatever using one of the pictures from the Cross-Section Castle book.