Everybody Was Kung-Fu Fighting 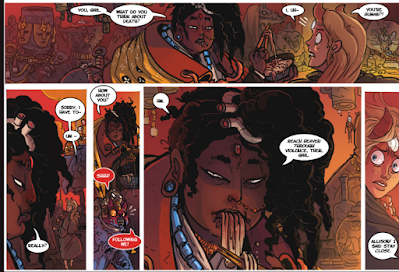 I had an idea for a combat system while out for a jog. I've also been rereading Kill 6 Billion Demons. I sat down and barfed this out.

This is obviously unfinished and a first draft. There are no character creation rules, as such. You can test it out by giving everybody any 3 techniques they want and seeing what happens.

I think there's something salvagable here. I'd love some feedback.

Bull in a Teahouse

I made up this little d66 table for a tiny project I'm making about kung fu.

If battle breaks out and you need to know quickly what sort of epic location you’re in, roll twice on this d66 table and combine the two entries.

Example:
I get I-1 and I-2. The combat stage is set in the middle of a thundering waterfall, under which the colossal statue of Prim Ysma sits meditating among the spray. Combatants climb her divine body of stone, leap across the pool fed by the waterfall, or stand on the pillar-like stones at the base of the falls as they battle.
Posted by Josh at 1:52 PM No comments:

Tolkien Would Have Hated the Lord of the Rings Movies

In June of 1958, Tolkien wrote a detailed response to a screenplay of a potential film treatment of The Lord of the Rings (Letter 210, The Letters of J.R.R. Tolkien). He begins the letter by noting: "If Z[immerman] and/or others do so, they may be irritated or aggrieved by the tone of many of my criticisms. If so, I am sorry (though not surprised). But I would ask them to make an effort of imagination sufficient to understand the irritation (and on occasion the resentment) of an author, who finds, increasingly as he proceeds, his work treated as it would seem carelessly in general, in places recklessly, and with no evident signs of any appreciation of what it is all about. ..."

Tolkien proceeds to complete eviscerate the screenplay down to the most minute detail, objecting to literally any deviation from the text. Any amendment, contraction, exaggeration, or flourish was met with Tolkien's acerbic rejection.

Here are a few of my favorites:

As you can see, Tolkien has strong opinions about even minor deviations from the text. Balrog laughing? I think not. Hobbits eating sandwiches instead of smoking? Ridiculous.

Consider, then, Jackson's treatment of the trilogy.
Film adaptations are notoriously bad, but Jackson's is generally well received. What makes a film adaptation "good" or "bad"? Enjoyment of a film is pretty subjective. But here--in this RPG blog that has nothing with film criticism at all--I would actually argue that Jackson's treatment of the trilogy is "bad," in so much as it unfortunately mishandles the core themes of heroism and virtue present in the novels.
Let's talk through the ways that the director adapts the text to film. Jackson's adaptation is done through addition, omission, translation and more unfortunately, subversion.
I'll talk through these techniques.

At times, a 1-to-1 rendition of a book into film would leave the audience confused or unsatisfied. Tolkien's text was notoriously scant on a lot of details later filled in by long talks with Gandalf (or the appendices, or by pouring over the letters of Tolkien). In these cases, Jackson has (usually wisely) added in connecting scenes to fill in the gaps.
Sometimes this is done successfully. When successful, the tone of the books is maintained, but additional context is added for the audience:
When unsuccessful, scenes or story points are added that do not advance the story. For example:

The films are already long. If Jackson had included absolutely everything, they would have been unfit for a film treatment.
This is usually where people tease me about being a stickler ("You're just sad because there's no Tom Bombadil"), but this is perhaps the most "pure" form of adaptation. I agree with almost all of Jackson's calls here.

Sometimes Jackson keeps a particular story beat in the film but translates the character or the circumstance. In general, this is done successfully.

Of all the techniques used to translate the trilogy into film, this is the one that proves to be most onerous. If Tolkien was nitpicky about small changes, these would have been intolerable.
Subversion is where a character says or does the literal opposite of what it is stated in the text.
You will see a trend here. There is a sense, I think, for American audiences that might makes right. The heroes are being heroic by taking bold action, drawing their swords, rushing in to fight the bad guys. But this is not the morality found inside the text. Quite the opposite. The heroes are heroes because they do not use their might. Almost every villain--Saruman, Wormtongue, Gollum--are offered a chance to go peacefully, or stay and put right what they've made wrong. They are villains because they refuse, but nobody compels them to do anything through force of arms.
In conclusion: If Tolkien objected to Pippin and Merry eating sandwiches (something in line with their character), he would have objected more strongly to characters acting in a manner completely in opposition to their core values. The film has "no evident signs of any appreciation of what it is all about."
Posted by Josh at 8:36 PM 4 comments: