One of the facts about reality that I find weirdest is that 1) homo sapiens sapiens are the only members of the homo genus, and 2) this has only been true for a relatively short amount of time.

Also, despite being pretty gung ho about Star Trek forehead ridge aliens or elves/dwarves/etc., the idea of seeing something that looks human but isn't triggers my fight or flight response. I get upset.

In that spirit, here are two upsetting creatures to place into your games. Natural philosophers characterize them as being human-adjacent, but in no way are they homo sapiens. This is because they are not sapient.

Gigas are quadrupedal non-sapient humanoids. They run sorta like people who participate in pony play. They cannot easily stand on their back legs so you measure them to their shoulder. On average, they reach about 19 hands high.

Despite their size, gigas are quite skittish. They flee from most perceived threats, although the males can be territorial during mating season. When threatened, they can be enormously dangerous. They have muscle mass like an orangutan. Their bite carries poisonous bacteria.

Gigas are herbivorous and subsist mostly on grasses. Herds of gigas roam in temperate plains biomes.

Gigas have been domesticated by gnolls, who train them to act as warhorses.

Nginikin are non-sapient humanoids the size of action figures. They fill the same ecological niche as rats. They infest ships and are inadvertently introduced to new ecologies, which they proceed to devastate. Everybody hates them.

Nginikin are omnivorous. Like goats, they can eat almost everything. They reproduce extraordinarily quickly and are frequently seen as symbols of fertility. As such, they are the primary ingredients for a variety of aphrodisiacs and fertility potions.

Most upsettingly, they have the capacity for mimicry. Though about as intelligent as rabbits, they can recreate the sounds of human language. Many people are tortured by the squeaks of "Howre uu dooin" coming from their crawlspaces.

The Manse is one of the most prolific posters in the blogosphere. They churn out content at a pace that leaves me in gap-mouthed awe. I wish I could be half as generative.

Recently, they posted about the expectations of Generic Fantasy Settings. Dan from Throne of Salt took the words out of my mouth and said that he wanted a Mad Libs version.

So here it is. Use it to further your Goal for Gonzo Principle (GfG Principle).

Pursuant to my last post, I have released Sorcery is a Sword Without a Hilt, the magic system from my forthcoming game HIS MAJESTY THE WORM. It's PWYW, with all proceeds going to fund cool artists for the game. There's no reason whatsoever to not check it out, steal some ideas, and smash them into your own game. Click the picture below to download it.

The book contains 40 level-less spells and dozens of magical catastrophes. The spells are flexible, with variable effects depending on how much "juice" the sorcerer gives them.

Each spell is designed to feel like a weird, useful tool. At the same time, there are no spells that solve the essential problems of dungeon crawling.

Although this is written with His Majesty the Worm in mind, it shouldn't take too much braingrease to adapt the spells into your system of choice, ala Wonder & Wickedness or Vaginas are Magic. There's a conversion guide in the back of the book to help you.

The Ethos of Sorcery in His Majesty the Worm

The magic system in ​His Majesty the Worm ​is probably the subsystem that underwent the most dramatic  changes during playtesting. Four completely different systems were written, playtested, and rejected. There were a lot of babies tossed out with the bathwater (which I'm pretty okay with.)

As I'm about to release the (final) rules for sorcery in ​His Majesty the Worm​, I wanted to reflect a bit about the design choices I made when it came to magic.

​I dug out these notes from my initial design documents. Note that this is basically how I start RPG projects--I just write down things I'm thinking about, then sort of iterate on that until it becomes words that someone else can (hopefully) understand. 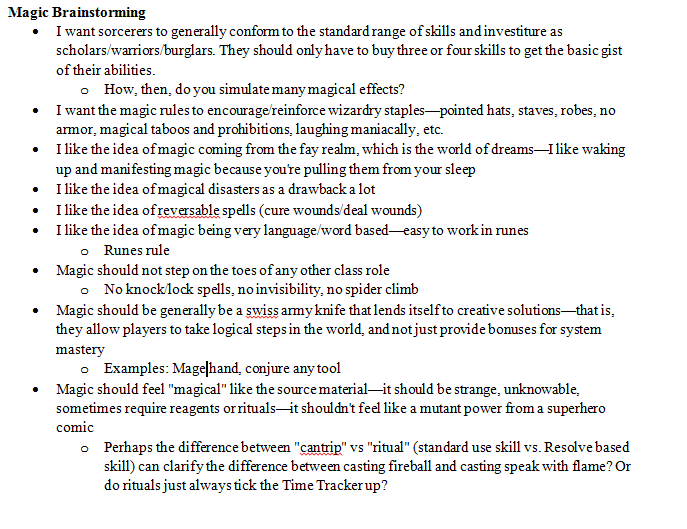 Some of these notes made it into the final version and some of them were left on the cutting room floor. Finding this document, I was impressed how many idea seeds survived.

One of my most central design goal for magic is that it should "feel" magical. It should feel unscientific. ​

Sorcerers use ​components ​to cast spells. These components are your eye of gnat, tongue of dog, toe of bat variety. Pulling out a pickled, rune-covered tongue and placing it into the mouth of a corpse to cast Speak with Dead inherently makes the sorcerer seem more magical and weird. Additionally, this system makes magic fit into the basic inventory management system that the game uses. How many spells do you have available equals how many pack slots you've dedicated to components.

Additionally, the spell descriptions are somewhat terse. They do not have the precise legalism that 5E or M:tG cards have. The GM has a good amount of leeway to interpret the spells as they're cast, creating a sense of manageable mystery.

Magic should be a strange Swiss-army knife

As a design goal, I don't want magic to step onto the aesthetic toes of other classes. If a wizard can cast Knock and Invisibility, they become better thieves than the thief. And that's disappointing.

With magic, a party should be able to solve problems in a dramatically different way than without it. A thief can unlock a door and eavesdrop at the threshold. A wizard can cast Portable Hole onto the door and peer through it. One is subtle and one is obvious. Both have their drawbacks and advantages.

​​His Majesty the Worm's ​is about dungeon crawling. There should be no powers, abilities, talents, class features, or spells that solve the essential problems of the dungeon: light, hunger, exhaustion. There are no spells that provide darkvision, conjure food and water, or provide continual light.

The one exception is the spell "Heavenfire" which does cast light and is harmful to undead. My rationale is that the component takes up as much space as a torch, but a sorcerer must power it through their ​Resolve. There's a trade off there, and a sorcerer casting an undead repelling light is fulfilling the "weird Swiss army knife" objective.

If all goes as planned, the sorcery rules for ​His Majesty the Worm ​will be published this weekend. They should be usable for your home game, and work as a proof of concept for the system as a whole.

Y'all, on March 13th, there's an online event for indie RPGs.
At 1 pm EST (6 pm UTC) I'm running my first public session of my forthcoming new-school/old-school game His Majesty the Worm.
You can sign up for the event (including my game!) here! (Updated with direct link!)
Would love to see some of y'all there.
Posted by Josh at 7:14 AM 8 comments:

His Majesty the Worm - a Tarot-based Dungeon Crawler (In Development)

As a guy who does marketing as a day job, I know I need to do a better job championing myself and my projects.

I am currently writing an RPG called HIS MAJESTY THE WORM. 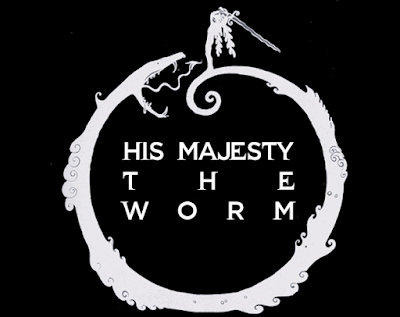 His Majesty the Worm is a dungeon crawler that's focused on often forgotten mechanics like encumbrance, light, player relationships, food, etc. Though not a retroclone, it's born out of the OSR movement (similar to Into the Odd or Troika!). It uses Tarot cards as a randomizer.

The game has been in development since 2017, and is coming into the home stretch. The game does not have a strong timeline (as I am working on this in my spare time). As the appendices are finalized, I'm releasing them as PWYW. The thinking here is that the appendices have enough flavor and moxie they'll let you know if this project is something you're interested in. All proceeds are channeled towards cool community artists and editors.

I've started a game page for this project at Itch, including a devlog. Please do follow the project, because I'm really excited to show you what I've been working on. Please do ask me questions, because I'd love to talk to you about this!
Posted by Josh at 1:47 PM 6 comments:

Email ThisBlogThis!Share to TwitterShare to FacebookShare to Pinterest
Labels: His Majesty the Worm

One of the people I've been lucky enough to meet on Twitter is Taylor Lane. They've been putting out a series of OSR compatible classes that are both interesting and usable (a narrow needle to thread).

We were talking recently about my love of cooking mechanics in RPGs, and they pointed out that their Monster-Eater class was similar to something I was thinkering on. They were kind enough to show me the class, so I wanted to talk about it here.

The Monster-Eater is a class that does what it says on the tin.

When the Monster-Eater manages to choke down a monster's corpse, they have a chance to grow a new organ based on the monster. Eat a giant spider? You can grow spider eyes, spider legs, or maybe a spinneret.

Each Monster-Eater can only have as many active monstrous organs as their level.

This is a double-edged sword. You also gain a monster's Hungers, which creates trouble for you--especially as they stack up.

Here's the reason I love this shit. Double-edged swords are interesting. Way more interesting than your single edged sword. One edge? Come on. Get with the times.

A +1 sword is boring. The sword bloodkraeling that bites its foes deep and can't be sheathed until it's drawn blood? That's the sword you remember.

If someone gives me "spider climb," that's fine. It opens up new game avenues! A good spell!

If I can spider climb because I have the terrible hairy carapace of the spider grafted onto me? AND I want to eat BUGS and shit? BOOM! I'm having fucking fun.

The Monster-Eater is a class that I would happily include in any OSR game I'm running. I'd probably smash it into a GLoG format (as is my want), but all the powers are excellent and the flavor is just my level of spice. Solid A class.

Secret bonus content: Taylor and I collaborated on the kleptomancer class from their Thief release. So you know that's good. BUT ALSO all the other Thief classes are well thought out and intentionally designed. I have a soft spot for the Noble, especially.