Sean McCoy was generous enough to provide me a reviewer’s copy of Gradient Descent, the new megadungeon for the sci-fi horror game Mothership. I’ll be reviewing it on this blog in two phases:

This review is not spoiler heavy, but it does have spoilers. Read forward at your own risk.

What do we have here?

Clocking in at just 44 pages, the Mothership core book is one of my favorite (newish) games. Each rule is so simple, so tied to its core themes, and so inventive. It’s one of those games that make you think, “God, I wish I had thought of that.”

For example, you can create a character just by following the steps embedded in the character sheet! Now that’s smart!

Plus it has this dope space butt.

At the same time, maybe it’s too much of a good thing? A few times reading through it, I wished these bones had a little more meat and a bit more advice. 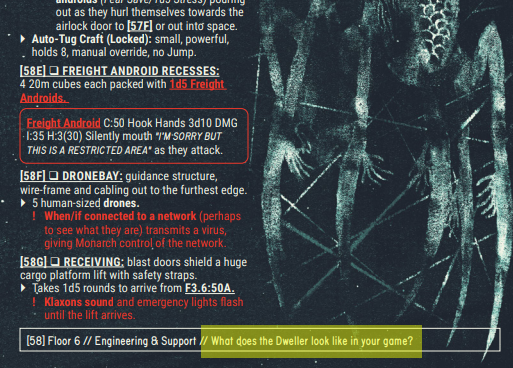 Is that good or bad? It’s definitely pretty clever.

OK so here’s the deal.

The Cloudbank Synthetic Production Facility was an orbital factory that produced androids. To coordinate its efforts and drive up shareholder prices, they utilized an AI called MONARCH. Through a campaign of subtle manipulation, MONARCH took over the factory and transformed it into a hellzone now called the Deep.

MONARCH utilizes several parts of the Deep for its insane experiments.

> Sidebar: There was a Batman the Animated Series episode when I was growing up with the same premise. I could never finish it because it was too scary for me. I’d watch it until the second commercial break and change the channel.

The module explores what it means to be human through a mechanic called the Bends. As the players dive into the Deep, they accumulate a growing sense of suspicion that they might actually be an android duplicate. There’s no way to know for sure until they’re dead, and an autopsy is performed with a scanning device.

The players are there to explore this megastructure, salvage what they can, serve as pawns for the various factions, and execute schemes of their own. The ultimate fate of the Deep and its myriad entities are left up to them.

The art and layout

Art by Nick Tofani was a treat. He is a horror artist I follow on Twitter, and I didn’t even know he did RPG projects. This a pleasant surprise. His art is so very weird and evocative.

(Also, I so like books with a single artist. Really provides a unifying vision throughout the module.)

I want very much to have versions of the images without spoiler text on them. The pictures are great, but I need to carefully crop them to be able to show them to players.

One of my favorite things about Mothership was the usability in the layout. Something like Mork Borg looks cool. It’s visually very interesting. A great coffee table book, really. Mothership has just as much care and consideration in its layout but it’s all geared towards actually teaching the reader.

All of that thoughtfulness is also present in Gradient Descent.

Some of the visual information was easier for me to grok than others. For example, the page background (dark versus light) shows at a glance whether or not the room described is lit or not. I like that a lot, and it makes sense to me immediately. 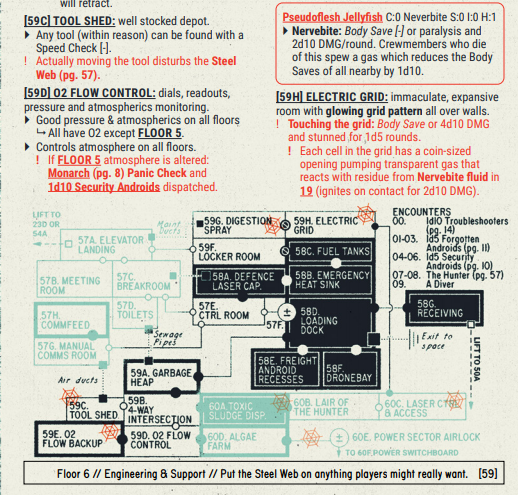 For example, you can tell that this section of the ship is lit and has artificial gravity, just by glancing at the page.

Contrastingly, there’s also a series of icons to demarcate airlocks, office doors, lifts, ladders, etc. The maps look like circuits. That's cool, I reckon, but I found myself needing to frequently flip back to the map key to parse that info.

Like every good megadungeon, there are interesting factions. Just to name a few:

Outside of the Deep is a safepoint and home base—a retrofitted thruster-cum-satellite called the Bell. The Bell is crewed by weird individuals that hint at some of the dangers inside. These NPCs crucially provide information that lets the players make informed choices during their delvings. Since informed choices are the fun part of RPGs, this is great.

The factory levels are inimical to human life. Each factory-floor-sized room is a terrible mix of things that will grind you, chomp you, pull you apart, render you, freeze you, electrocute you, radiate you, or cover you in burning aluminum foam.

The OSR ethos reigns supreme in this module. These dangers are obviously telegraphed, but if you get near these things, they will kill you dead.

These all grow somewhat tedious or monotonous to read. Each room is a different flavor of instant death. This is where, I think, random encounters are needed. If each room is just a simple assortment of the buzzsaws and lasers that demolish player characters, what is there to do in the room? The answer is that the players negotiate encounters with NPCs, friendly and unfriendly, in these deadly contexts.

A big question I have is this: Are there enough random encounters to keep things interesting? I think this will be the big revelation of play for Part 2 of this review.

As characters explore this terrifying environment, they also uncover all sorts of unlikely horrors:

As PCs are exposed to these spooks, they slowly accumulate Stress and the Bends. This makes exploration firecrackers of Fear saves and Panic checks. I believe these will create chain reactions between the PCs that will inject further drama into each cavernous factory room. This is something else I’m keeping my eye on for Part 2.

As we’ve established, there’re a lot of sticks. The carrot of this orbital megadungeon are Artifacts. These are the OSR magic items of drawbacks and dubious use: indestructible marbles, cables that point towards hidden rooms, transplanted enhanced human eyes. Some of the Artifacts are more interesting or evocative than others, but the basic premise seems sound.

I buy modules for ideas I couldn’t have myself. In this, Gradient Descent absolutely delivers.

Luke Gearing et al are tapped into the sci fi horror tropes. All of these little spine-tingling discoveries that players stumble over are fresh and evocative. Fun moments. It’s where the writing really shines.

On the other hand, reading through the book I found myself asking, “OK, but how am I going to actually use this at the table?” In this sense, I could have used additional supports from the book.

I am excited and energized to run this module, so the book succeeds for me as “Module as Art.”

I will see you again in about a month for Part 2!

The following is a result of Gygaxian Democracy threads on both Reddit and Twitter. Many thanks to all the contributions. Y'all have the big brains.

Pick up whatever rulebook you use. Flip to the spell section. Go to the entry for "Resurrection" (if one exists). Take a Sharpie. Mark through the spell description like an FBI censor returning a FOIA request about the aliens' role in the Kennedy assassination.

Jot this down instead:

"The first time you cry over a dead body at a shrine, a church, or holy site, Death appears and offers you a bargain for the soul of the dead.

Roll on the table below. Accept or reject Death's bargain.

Anybody can call upon Death once. Afterwards, they will not answer your call again.

In the interim, the player of the dead character can play a henchman or roll a new character, as per usual."