Ain't No Grave - Card-based Combat in the Wild Wild West

One day I should stop making tiny systems and focus the precious free time I have on polishing and publishing.

The sun is directly overhead, and it's hotter 'n hell. A tumbleweed is the only thing moving through the muddy streets of the outpost. There are only two kinds of people: the quick and the dead.

Which will you be?

Disclaimer: The combat subsystem requires flipping or sliding poker chips. If you're the sort of person who won't find physical dexterity tests fun or appropriate for your games, this system isn't for you.

The game begins with two standard poker decks, Joker's included, shuffled together. Everybody shares this deck.

The dealer (who rotates each combat round) puts four cards, face down, in the middle of the table. This is the River.

The dealer deals four cards to each player involved in the unpleasantness. This is the player's hand.

The Game Marshall (GM) should set up a map of the situation, either sketching it out on a dry-erase board or creating a diorama with miniatures. Everybody should be clear where they are and where other obvious combatants are.

On a separate, but easily accessible surface, the GM should set up a shoot out silhouette. See below for details.

The dealer then flips the first card of the River over. This signifies that the first turn of the combat round has begun.

At the start of each turn, each player places one card from their hand face down in front of them. When the dealer signals, everybody flips their cards up at the same time. The player with the highest card numerically acts first, then each other person in descending order. Jokers high, aces low. Players with ties go simultaneously.

During each turn, each player selects a card from their hand and places it face down. By doing so, they are choosing to do one of two things: use an action (based on their card's suit) or use a special technique (based on a poker hand available to you). When it's your turn to declare what you're doing, you say what action or special technique you're using and who you're doing it to.

Jokers are wild and high.

Additionally, when you act, your character may move one zone on the map, e.g., from the street to the porch, from the porch into the saloon, from the saloon to the backroom, etc.

There are four basic actions based on the suit of the card you played. Some actions have a counter. If your opponent has a card in their hand that counters your action, they may play it by spending 1 grit. This interrupts your action in a specific way, discussed below.

When you play a Spades card, you take the ♠Shootin' action. You may take one of your ammo chips and slide it or flip it onto the shoot out silhouette.

If countered, your target places their card over their shoot out silhouette, as if they had preemptively dived for cover. See  the ♦Dive for Cover action for full details.

When you play a Clubs card, you take the ♣Roughhouse action against someone in your zone. Choose one of the following options:

Counter: None
When you play a Diamonds card, you take the ♦Dive for Cover action. Choose one of the following effects:

Counter: None
When you play a Hearts card, you take the ♥Recover action. Choose one of the following effects:

Counter: None
You may discard a card of any suit to do literally anything else the Game Marshal allows. You can jump from one carriage to another. You can pull the train's breaks. You can shoot your horse to create cover in an open field.

I'm picturing a laminated small poster sized page like this: 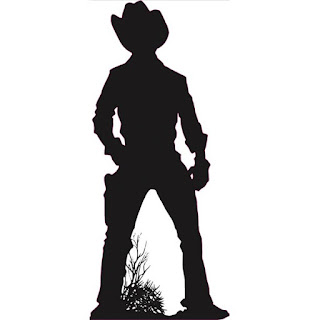 I got this off of Walmart dot com. I'd imagine a few different silhouettes being included in the game to represent different scenarios. Maybe some overlays like "Window" or "Behind horse." If you want to try out this ruleset at home, there's a million Google images for "cowboy silhouette." You'd have to print it out large enough to let you flip your chip onto it.

OK here's where things really get complicated/interesting/fun. At the beginning of a turn, you can play face down as many cards from your hand as you want to make a poker hand. You may, if you want, also create combinations with cards in the River.

For example, if you have a 5 of Hearts and a 5 of Clubs in your hand, and the River has a 5 of Spades, you may play both of your 5s face down. When you declare your action, you may activate your Three of a Kind special technique.

(In a full version of this game, different characters might have entirely different sets of special techniques they could trigger. These are just examples.)

Each poker hand triggers a technique:

You can perform some unlikely feat: shooting a hangman's rope, jumping into a conveniently placed hay wagon from a third story window, or swinging on the chandelier across the saloon. This technique allows you to edit the details of the scenery somewhat to accommodate your thrillin’ heroics.

You take the ♠Shootin' action but it can't be countered.

Three of a Kind - Catch Your Breath

You take the ♥Recover action and regain all grit (up to the max of 3).

You interrupt another player’s action to perform your own. You can use any of the main actions and it will resolve before the current player’s.

Take the ♠Shootin' action and call what part of the body you're aiming for. If you hit, it can’t be turned into a graze.

Four of a Kind  - Fan the Hammer

Take the ♠Shootin' action and you can spend as much ammo as you have against different targets. You may only take one shot per target.

Straight Flush - Ace in the Hole

You automatically hit your enemy on a body part of your choice. They take a wound there. It cannot be turned into a graze. You can use this technique to blast a gun out of their hand or leave ‘em dead standing.

You have your enemies dead to rights. You (or an ally) may make one demand of each varmint you have cornered. If they agree, you feel cocksure they'd never violate this oath. If they disagree (or if you just want to) you can waste ‘em.

My currently in-development dungeon crawler HIS MAJESTY THE WORM is another card based game. If you think flipping over cards dramatically and choosing your actions based on the cards you've drawn sounds fun, I hope you'll check it out (soon).