Take me to the Dark Waters

Nostalgia is potent. It makes sitting down for an afternoon and playing a frustrating NES game into a fun experience. It lets you rewatch petty, derivative films and have a good time.

Nostalgia colors your perceptions and memories. It lies to you. It says "this is good," even if it’s bad. As near as I can tell, nostalgia has fueled the last decade of the entertainment industry.


Under nostalgia's heady smoke, the other day I thought to myself "Self: Do you remember how awesome Pirates of Dark Water was? That show was great! Why don't you put on an episode and look it up on the wiki, it'll be a laugh."

Here's a real fact: that show was less good than I remembered it. But it surprised me in lots of little ways. The protagonists weren't alabaster white. It was packed with non-Tolkien fantasy. It had ships large enough to have their own ecosystem. It reminded me of LeGuin's Earthsea series. 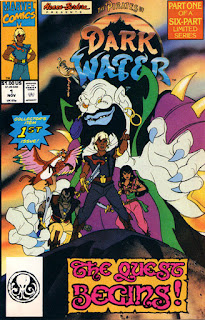 (Here's where I found these things)

This might just be the deadly nostalgia talking, but playing in a setting like Pirates of Dark Water actually sounds super fun. That's why I'm jabbering about it on here, so I can harvest all the gold nuggets and separate them from the shit nuggets of 90s cartooning.

Here are some awesome quotes from the source material:

"The planet will be as wild as a writer’s imagination. Nothing is too far-fetched if it comes organically from a world where evolution has pushed out in bizarre new directions."
Fuck yes. That is the RPG world I do like.

"The humans of Mer are a rugged breed and may best be described as sea cowboys." I would like to be described as a sea cowboy, please. Unfortunately, the other races listed in the RPG (out of the professed hundreds) are traditional fantasy derivatives. Calling your ancient forest dwellers "Kree" doesn't make them not-elves.

"The Maelstrom is Bloth’s massive and deadly warship. This colossal warship is the latest in Merian destructive eco-technology. It is built from the bleached carcasses of leviathans, and resembles a gargantuan floating fossil. The masts are visible as the giant creatures’ vertebrae. Massive rib cages serve as jail pens and holding cells below the immense deck. Its enormous size is a tribute to Bloth’s bloated ego and is its one drawback. Below the main deck sits a labyrinth of passageways, sewer lines, holding cells and slaves’ quarters. An entire subculture exists within the bowels of this monstrous vessel."
As you telling me that there are pirate kings, and the pirate kings have pirate ships that are large enough to have a whole dungeon inside of them? That rules.

"THE IMBIBERS are a group of specially trained children who drink Dark Water. They becoming all knowing for a short span of time and then turn to stone to take a place of honor in their tribe’s sanctuary."
Feeding children Cthulhu's excrement so they can be omniscient but then turn to stone is something every RPG setting needs. SOLD.

Luck
I remember the character Ioz saying, "By the Luck!" on the TV show sometimes. Davos Seaworth is always going on about luck, too. Luck is important for pirates and vikings; you need luck on the sea because nothing YOU do can affect its great bulk. 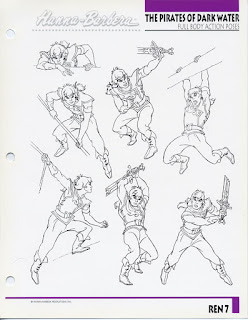 Get rid of Saving Throws. You have a new attribute called Luck that you roll for all those sorts of things.

At the beginning of the game, it's a neutral (+0) stat. When roll a 20, subtract 1 from your score--your luck has begun to run out. When you roll a 1, it goes up by one point--you begin to work off your bad karma.

If your luck ever goes down lower than allowed, it rolls over to the highest rank. Same if it goes too high.

Your luck stat also goes up by 1 every time you do attempt something very swashbuckling, like riding a chandelier to the upper story of the tavern or swinging from the rigging to another ship. Incentivize being a cool pirate in a cool pirate game. "Brave deeds breed luck," as they say.

With forests hard to come by (the planet is 98% water), ships must be made out of exotic materials--a leviathan's bones, a lion turtle's shell, a crashed meteorite--even something as exotic as wood.
These things were once living. Everything was once living. Now they're a boat.
How do they feel about that? Well, it depends on well you treat them.

When ship idols are awake and pleased, they're the best boats in the whole world. Ships of different construction like different things. Leviathan-bone ships might like it when you dump captives with cut throats and bound hands into the water. Ships of bound eldwood like it when you pull them up into river mouths and let them drink freshwater.

Whenever a successful sacrifice is made to a ship idol, the ship gains inspiration, to use a 5E parlance. Anybody on board who's a member of the crew can use the inspiration on something related to seacraft--piloting, navigation, kicking a boarding pirate back into the water, etc.

Magic and Balance
Sorcerers are an important member of any crew. They can sing away storms and call up winds and talk to the ship and drive away merfolk. Every ship has a sorcerer.


Unfortunately, every time a sorcerer calls up a storm, it means that somebody else's ship is stilled. If you deflect a storm, twenty other ships suffer its ill luck. This is the Balance.

In LeGuin's Earthsea series, Sparrowhawk talked a lot about "the Balance." LeGuin's Taoist leanings crept in (more elaborated textually in The Lathe of Heaven). It is better to not cast magic than to cast magic. It was better to not act than to act.

This is something textually pleasing but extremely difficult to "simulate" in a role-playing game. If the players aren't *acting*, why sit down every Tuesday with your buds? Why not just read LeGuin from the privacy of your own home and get drunk?

Even so, magical restraint is a trope, and RPGs are all about emulating tropes. It's an important thing for rules to do.

OK, so, sorcerers can do big magical things, but it fucks up the Balance. Let's steal (steal steal steal!) West End Games' Force token rules. Here they are for a bad pirates setting.

For each sorcerer at the table, set out two coins--both facing heads up.

When a sorcerer casts a spell, flip a coin face down.

When a coin is face down, the GM can use one of his Balance Moves against the players by flipping the coin's face back up. He does this at opportune moments, or just when the players are on a flow of good luck. (It's important for stories to have both ebbs and flows.) He can do this when it makes sense narratively. He can do this whenever, as long as one of the coins tails up.

Windkey
The spell of Windkey can put a steady wind into your sails, or take it away. It can send a storm you can see towards any of the eight compass directions. It can calm waters. It can call waves large enough to drown a swimming man. It can capsize smaller ships.

Chanting
The spell of Chanting recites the memories of the Pattern of Ages. The sorcerer can ask the GM any question about history and receive an answer.

Patterns
The spell of Patterns searches the memories of the Pattern of Ages and reveals the recurring elements through textual analysis. By looking at what comes before, the sorcerer guesses to what comes afterwards. He may ask the GM, "If X happens, what will happen?" The GM will answer him.

Hand
The spell of Hand are the hundred small illusions and useful dwimmers that sorcerers use to prop up their power. They can levitate straight up into the air. They can lift objects that can fit in their hand and call them to them through the air. They can summon a magelight and have it hover near them. These are vulgar displays of power.

Naming
The spell of Naming reveals a living creature's name to the sorcerer. This is important for Binding.

Binding
The spell of Binding is a single command that must be obeyed by a dead creature whose living name the sorcerer knows.

Chimera Beasts
I'm finally ready to admit this: I really like hybrid animals.


In an RPG, it's important that you communicate to your players what's going on and what their characters see and impart all pieces of necessary information. However, while speaking and listening, players literally can't understand your three-hundred world essay about how cool your new monster is, and all the legends that speak its name in terror, and your thorough description from tip to tail.  Our brains just aren't wired to do that sort of thing well.

No! Let's see some gorilla rhinos.
In an RPG, you can have normal animals and make them do slightly different things. For example, all cats can see ghosts. All foxes travel both in the real world and the dream world. Owls speak perfect Common. Crickets are the souls of aborted babies. Whatever. But you have to tell your players that info, and make it close enough to the real world so that when you say, "A cat crosses your path," they don't have to do too much double-think to understand what it means in the game world.

But you know what a cat is. And you know what an owl is. So a catowl is both of those things. Nocturnal. Carnivore. Aloof and coy. Quiet, except for its meow-hoot. Can fly. Cute as the dickens.
Chimera animals are an easy way for a GM to infuse the game world with understandable fantasticism.

I think I've convinced myself that sometime I'd really like to run an Earthsea/Dark Waters hex crawl where the pirate PCs wander a bizarre and fantastic realm, trying to deal with the fact their world seems to be falling into black nothingness or making themselves filthy rich while everybody else dies.

What would you want to include in this setting?