The Maidens and the Moon - A Frankenstein Adventure

For the past three years, I've been play testing my fantasy heartbreaker His Majesty the Worm with my friends. It's been fun!

Recently, we stopped playing a campaign in the "default" setting of HMtW and started playing a Zelda-inspired campaign I've called "The Maidens and the Moon."

The essential premise of this game was stolen from a lot of blogs I like and cobbled together. The main influence is Arnold K's The Moon Castle, which he made several posts about but ultimately never finished. I'm posting this because I've seen a few other campaigns on Reddit that also drew inspiration from this source and I wanted to compare notes with them since they've been generous enough to post their notes online.

For the greater part of HMtW's playtesting, I've been running a megadungeon. The first two levels of the megadungeon (the Spires and the Castle of Crossed Destinies) have been mostly explored and their dungeon lords defeated. The deeper levels (the Moat, the City of Ruin, the Undercastle, and the hidden level) are mostly unexplored. However, a big sandbox adventure is never really "done." The players have both party wiped and completed big quests, but they're always adventuring until they want to stop. I wanted to play a game with a more traditional structure: do X, Y, and Z, and defeat an antagonist. It felt like it'd be a nice change after three years of sandboxing.

My primary rules for adventure design are this:
1) Read a lot. You can't write if you don't read.
2) Repurpose everything you like.

I'm Frankenstein. My adventures are my monster. I rob from the graves of content creators I admire and stitch them together.

When I was laying out this adventure, I started digging up content from my favorite creators. Essentially, my RPG inspiration includes:

In terms of an Appendix N, I told my players to imagine a Zelda adventure (exploration, emphasis on item use, puzzle-based dungeons, "collect them all" quests) and Miyazaki movies (female protagonists, serious themes explored by juvenile characters, bright colors and beautiful landscapes).

What I told the players

These are the house rules I provided to my players. It includes some inspirational art and teaser text. (All the rules are, obviously, for my heartbreaker. Ignore them if they don't make sense.)

The general premise was this:

The Structures of Play

I made this map for them. 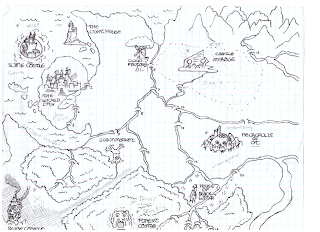 The map is a point crawl. The players can see most of the main locations (all the castles) and a few extra side quest/mini-dungeons (cloud factory, lighthouse, black witch, goblin market).

Players choose which location to go to. Each bridge they cross prompts a draw on the Meatgrinder table. Each quadrant where a castle sits has a different encounter table.

The encounter tables have various NPCs and micro-dungeons embedded into them. As players discover them, they can draw them into the map. That's why I left so many blank spaces. I wanted to discover (at the same time as the players) exactly what was there.

Each bridge is manned by a troll. The trolls ask for tolls of 10% of total wealth as players travel east to west. As the party returns from adventuring to the city, they'll lose part of their coin.

Sidebar: Taxes are a GREAT way to incentivize your players. I've never seen so many people become sovereign citizens so quickly as when I introduced the idea of taxes into a fantasy game.

Play, per my rules, is separated into four phases:

I asked my players to be patient with me as I started them both in medias res and without knowing what had happened to Princess Sun. After the PCs had stopped the Moon King's initial machinations, the PCs awoke at the Wicked City and made their way to the Collegium Vestal--essentially the Vatican--where they found Princess Sun's desiccated-yet-living-body.

From there, players had a choice of where to go.

Part of the advantage/disadvantage of the way I run sandboxes is front-loading work. I spend a lot of time getting several dungeons/dungeon levels fleshed out with different encounter tables, NPCs, treasure, etc.
Pros: This makes things very easy for the players: they can go anywhere and do anything and they're never going "off the map."
Cons: Obviously, this is a ton of work up front. If your game falls apart and you haven't seen content, you might feel as if this is wasted work.
Conciliation: If you ever have a game fall apart and your players haven't seen some content, you get to re-use that content. Blam. Free content.

In a subsequent post, I'll lay out the Forest Castle (which my players have mostly completed, though they skipped a lot of the non-essential content)

Email ThisBlogThis!Share to TwitterShare to FacebookShare to Pinterest
Labels: Maidens and the Moon