Whatever you call a Tolkien weeb, I guess that's what I am. I read the books every year. I wrote my thesis about the "magic system" of the trilogy. I'm a big Tolkien nerd.

As such, I've played every licensed Tolkien RPG. I just started back up with a MERP game, and it's made me reflective of my career playing Tolkien games.

Here's a quasi-review of all of them.

There're about 3-ish.
Let's think about them one by one.

MERP has the broadest license of any of these games, and so feels very much like a stew. Do you want to be a Hobbit mage and adventure with a Noldo Elf scout, a Black Numenorean warrior, and an Orcish animist? Well, you can! There are vague sentiments about the GM needing to set limitations, but there are rules for everything from 1st Age Elves to 4th Age Trolls.

The upside to this is there are, like, a million sourcebooks. Everything Tolkien ever mentioned or hinted at is in here. This can be very good for running a sandbox game. Do the players want to go south from Bree to Dunland? Sure, let me just whip out my Dunland book. Do the players want to go even further south into the deeps of Harad? Sure, I think there are like, three sourcebooks that cover those lands.

Appearance: Rereading MERP has given me a deep appreciation for modern layout and informational design. Each page is double columned small text, with little clip art pictures of wolves smashed into the corners to make sure that everything fits as tightly as possible.

Some of the art is great--really flavorful stuff--and some is shit. Angus McBride, who did many of the covers, is a personal favorite Tolkien artist of mine. I love the character art for the pre-made characters that are included in the 2nd edition. A lot of the art is given a disservice by being absolutely shoved into the bad formatting.

Play: As I said in a previous post, in some ways MERP is a forefather to PbtA attitudes of mixed success and "move" mentality. The game seems to imagine you have a very specific set of things you will want to do, and has created buttons that you press to do them.

The main mechanic is simple: Roll a d100, add your skill modifier, add the difficulty adjustment, and compare it to a table. The table tells the GM what to do. In practice, this requires a lot of minor math equations and page turning.

In combat, this is both slow and somewhat fun. Sometimes, when you hit, you get a critical. This is another roll, but leads to flavorful results. For example, I once saw a dwarf warrior critically miss the troll they were attacking and critically succeed at accidentally hitting their nearest companion. The dwarf collapsed the poor hobbit's lung. He died in 6 sounds. Classic MERP.

This slow, methodical, chart-oriented play creates a very specific feeling at the table. It's not a "bad" feeling necessarily, but it is not one that I would seek out in normal circumstances given my personal predilections.

Final Score: Oof. Honestly I love it, but the game gives me a headache. C +

Sidenote: A team of old MERP fans created a modern love letter to this game called Against the Dark Master. I read the sample PDF and was impressed. Cool art too. Worth checking out.


The Lord of the Rings Adventure Game by ICE

Also by ICE, the Lord of the Rings Adventure Game was a stripped down beginner's box set of MERP, which, itself, was a stripped down version of ICE's generic fantasy game Rolemaster. The game is abbreviated "LOR" and I have no idea how they got the acronym. I just looked in the first book and it doesn't give any explanation. It's just called "LOR" a lot. Does that mean...Lord Of (the) Rings? What about the "adventure game" part? Inscrutable.

This game is a series of three adventure paths with a simple rule system and pregenerated characters. It's aimed at a younger audience that has never roleplayed before. It has a lot of hand holding. But honestly? The examples are super tight. This is a good example of what a good beginner's boxed set should look like.

Three adventures were published. Two never saw the light of day before ICE lost the license. Sort of a shame, really. In a lot of ways, this was the more successful game.

Appearance: Like MERP, there's double columns of cramped text. Unlike MERP, the layout is somewhat cleaner and the images feel consistent and well set. Not good by modern standards, but less migraine-inducing to read.

Play: The numbers are shrunk down to be handled by a 2d6 roll against a set difficulty. Bare bones. Simple. The game is tighter than MERP though, and that's a good thing.

The adventure paths are the railroad express choo choo chugga chugga chugga where's your ticket. They say it really explicitly. "If your players try and wander off the path, here are some tips to get them back on track."

That said, the writing of the adventures and the setting feel really appropriate for Middle-earth. Obviously the author, Jessica Ney, was a passionate fan. The "feeling" of the setting is more apparent in LOR than MERP.

Final Score: This is MERP's hotter, nicer younger sister. A solid B.


The Lord of the Rings RPG  by Decipher 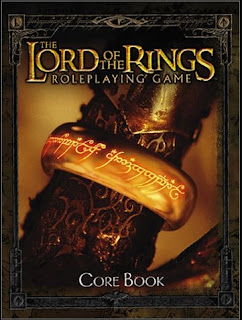 OK so picture this. The year is 2002. I dressed up for the Fellowship movie. I am a senior in high school. I find this book in a Barnes & Noble and go nuts. I immediately buy it and run it for all my high school friends.

We play it for like a year. The game falls apart in our hands.

"Wait, if I take the Defensive Action move, I roll 2d6 for my Defence. My Defence is already an 11. I'm probably going to become easier to hit?"

"I'm a magician, and I have the Strong Will feat, so my Fatigue check is made with a...+10. I'll only get Fatigued if I roll snake eyes. No wait, I can reroll snake eyes. OK, I make it. I turn the troll into a frog."

Have you ever bought a video game based on a major motion picture and been disappointed? Yeah, this is that, but in RPG book form.

Appearance: The game is a movie tie in, so features stills and images from the movie. There were maybe a few pieces of art but it was pretty pathetic.

Rules: Do you remember RPGs in the early aughts? It was very formulaic. You had a feats. You had attributes. You added your skills to your base attribute chance. Nothing new, nothing weird, nothing innovative.

I collect a lot of RPG books just to like, harvest mechanics I like. There's nothing worth stealing here. This is Generic City.

Final Score: Was this thing ever playtested? C -

Caveat: OK I fucking lied. This game had one SUPER sweet module: the Moria boxed set. I still use this anytime anybody wants to go into Moria or a Moria-like dwarf dungeon. The maps were dope. The lore about the seven houses of the dwarves felt super authentic and played within the "space" of the setting very well. To me, this is the definitive Moria role-playing game. A+.

The One Ring by Cubicle 7

This is a great game that I don't have any interest in actually playing.

I'm not trying to be mean. It's just not for me. I think what they did was good. They figured out the feeling of the setting, they iterated inside the bounds intelligently, the game has good modern design, and it's just not my particular cup of tea.

Here are some things I really, really like about this game:
The game also includes a few adventure paths. They feel very much in the vein of LOR: railroady, but appropriate for the setting.

Appearance: The books are very pretty. The art is nice, consistent, and appropriate. They're perfectly adequate as RPG books.

Rules: The rules are sort of where I get tripped up. It's fine, just not my cup of tea. In general, players roll small pools of d6s and a d12 at the same time. The d12 can either produce a number, an eye, or a "G rune." If it's a G rune, it's an automatic success. If it's an eye, an automatic failure--or invites some sort of critical miss. If you're fatigued, you ignore rolls of 1-3 on the d6, which is clever.

The thing that somewhat rankles me about the rule systems is it feels very gamey and random. I find it hard to get immersed into my character. For example, travel encounters are mostly random and mostly ping your Endurance for failed tests. This basically boils down to luck, not player skill. If you roll poorly while traveling, you'll get penalized and start the "real encounter" at a disadvantage. That means there are certain skills you "have" to dump points into to be "successful" at the game. I get bored figuring these things out.

Final Score: The crunch isn't my cup of tea but the game feels appropriate in breadth and scope for a game set in Middle-earth. It's very nicely delivered and marries the mechanics to the setting. A -

Adventures in Middle-earth by Cubicle 7

Whenever somebody wants to take a unique concept and then "translate" it to d20 it makes me gnash my teeth, rub myself with ashes, rend my clothes, and wear sackcloth. Adventures in Middle-earth did a bad job at doing a bad thing and it sucks. The original TOR was pretty good and this is so deeply disappointing. Just ignore this.

Any attempt to make a play experience conform to d20 that isn't narrowly about being fantasy Avengers fails hard. Saying, "OK gang, how would you run D&D but--get this--low magic? Only fighters and rogues allowed," is pathetic. Get the fuck out of here and play goddamn Burning Wheel or something. Learn a new game.

Email ThisBlogThis!Share to TwitterShare to FacebookShare to Pinterest
Labels: tolkien