No Adventures, Thank You 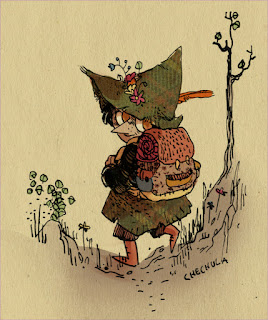 The flow of a Under Hill, By Water game is a little different than a standard dungeon-crawling game. You're not some stupid burglar going into troll caves and dragon-infested mountains. You're just a respectable halfling trying to be a good person. Even so, unpleasant and uncomfortable things can happen in one's life. Here are the rules for them.

Animalis
This skill is important to train, control, and understand animals. Halflings generally have better leeway with the domestic animals they raise and train than with wild animals, but this skill is a viable way to calm down a hostile wild animal and escape the scene.

Herbalism
Halflings are farmers and think a lot about the growing things of the earth. Herbalism takes this a step further with a knowledge of healthful plants and their properties.
Use this skill to find herbs in fields and forests and make a poultice. This takes a Turn to do.

Lore
Any halfling can remember what happened back in the summer of '44 when the white wolves came, or recount the hilarious story of their fat uncle Barnabas getting stuck in the well. Test this skill when the halfling is trying to remember or dig up half-remembered stories and legends from the ancient days when halflings weren't so secluded and the old king yet reigned.

Halflings only speak the Common tongue, with little scraps of their ancestral tongue mixed into their truism and sayings. When a halfling comes into contact with another language, they get a chance to see if they can speak it by making a Lore roll. A character gets one attempt to know any particular language. If that one attempt fails, the character simply does not know the language.

Professions
Halflings who work and live in the Commonwealth gain ([Profession rank]d10 x 10 copper) + (1 silver x rank) each year during the winter phase.

Halflings always have access to the products of their profession for half-price. A rope-maker, for example, could outfit an expedition in lengths of rope. If your profession doesn't produce "goods" (like, say, sherrif or actor) you probably have other advantages. At the very least, you're friends with others in your profession and can hire them as hirelings at half cost.

If a halfling PC sells his goods during game-play, subtract the total he makes from his year-end profits.

Singing
Songs are important part of the Commonwealth. There are work songs and drinking songs and bathing songs and walking songs. Anybody PC can tap into this vast network of songs by singing (or at least saying) a stanza of a song outloud to everybody else at the table. You can plagiarize a Tolkien song or make one up--whichever suits you best. If you do so, one PC at the table can benefit from one of the following effects:

Singing takes a Turn. A character can only benefit from the effects of a song once per season.

Sleight of Hand
Picking the pockets of an unaware person, hiding a small object from a search, readying a weapon without any observers noticing, swapping out an object on a weight-sensitive plate with a similarly-weighted bag of sand, these and more are examples of Sleight of Hand. A character has a base 1 in 6 chance to successfully perform such an activity.

Stealth
Stealth allows a character to sneak around and hide. Stealth is not invisibility. A character must be hidden and his position unknown in order to use this skill.
A halfling is considered to have a Stealth skill of 6 against any non-halfling if they are in the Commonwealth.
Their usual skill rating is only used when trying to sneak past other halflings.

Swimming
Halflings can't swim. Any halfling that falls into a body of water has a chance of drowning Drop the character to -1 Blood and roll Tears to see if they fall unconscious and fall beneath the waves. Every round in the water requires a successful Strength check to try and splutter to shore.

Other uses of Tinkering (setting traps, for example, or jury-rigging impromptu devices) should be adjudicated by the GM on a case-by-case basis. Remember the Let it Ride rule.

Woodcraft
This skill allows characters to find water and hunt for food. Halflings don't travel often outside the hedges of the Commonwealth, but foraging and hunting is a useful and profitable hobby, sport, and job. Use your Woodcraft skill to forage and hunt (per LotFP rules) and avoid getting lost if you're ever have the misfortune of being in the Deeping Woods.

Everything not covered by a skill isn't considered insider information. They can be covered by attribute tests in general. For example, climbing up a sheer surface is just a Dexterity test (halflings are fairly good at stuff like that).

Halflings don't usually encounter locked doors (that can't be opened by knocking politely) or traps. We don't need rules for that sort of thing. Halflings are, by a whole, a peaceable people. Still, they practice some warcraft ... or at least war games. Harvest festivals often feature quarterstaff duels (called "stavin'"), with the loser being flipped into shallow water. The old halfling men who play at being in an army call themselves the Knights of the Old Road and ride around on their hounds or pigs, bearing bent lances.

Sometimes, though, halflings have to use arms in earnest. Wolves sometimes try to steal game during the winter. Sometimes the Big Folk will get drunk and need to be ejected. A hundred years ago, a score of goblins crossed the water, stories of which are still told to this day.

Initiative
When combat breaks out, it is usually unexpected for all sides. If one side is expecting it and the other isn't, it's an Ambush. See those rules below.

During the first round of combat, things are a bit hectic. Fists are flying, mugs of ale are getting knocked over, damage is being done to property and person. Each individual combatant rolls a 1d6 and adds their Dex modifier. Higher numbers move first. If there's a tie between a NPC and a PC, the GM determines who goes first. If there's a tie between two PCs, they decide among themselves.

All other rounds of combat proceeds in the following order:


During a combat turn, every acting character has about as much time as needed to move about 30', make an attack (or equivalent), and perform some minor action.

If an Ambush happens, the ambushing side goes first as a team. All damage done by the ambushers during the first round of combat bypasses Sweat and goes directly to Blood. Thereafter, combat proceeds as normal.

Missile attacks like bows and blunderbusses harm Blood directly and bypass Sweat. If the attacker rolls a natural 1, he automatically hits and rolls double weapon dice.

Melee
To make a melee attack, the attacks tests their Strength and the defender tests their Armor Class.
If the attacker rolls a natural 1, he rolls double weapon dice and attacks Blood directly, bypassing Sweat (if he hits).

Maneuvers
Several maneuvers give d4 bonuses to subsequent rolls. Just put a pack of d4s in the middle of the table. When a maneuver is used that gives the bonus, pull one from the pile and place it on your character sheet. After it's rolled, put it back in the middle.

Clobber - You gain a +d4 to your next damage roll.

Disarm - Your target drops one thing that they're holding (their choice).

Evade - You gain a +d4 to your next armor class roll.

Grab - You hold on to your opponent to try and get them good. Your very next attack against them bypasses Sweat and goes straight to Blood, unless they Shake You Off or damage you first.

Knockback - Your target is kicked back into a direction of your choice. If this would put them in mortal danger (like falling off a cliff), they get to make a Dexterity saving throw.

Shake Off - You can cancel somebody's Grab maneuver with this maneuver.

Trip - Your target can't move away from you next turn.

I know I promised professions and family details, and those are still forthcoming. BLAMMO
Check out the full game here!