An agrarian society, the Commonwealth is close to the wheel of the seasons. A halfling's life is built around the change of the seasons, the lengthening of days, the ebb and flow of weather. That's why Under Hill, By Water separates game play into four seasons. Each season is basically a single act in the life of your halfling and their village--the GM presents a scenario of village life, which the PCs explore. Each session (or two) at the game table should deal with one season's scenario. Once the spring, summer, and autumn seasons have been played, the halflings will celebrate Yule during the winter season and reflect about their previous year. This might increase their rank.


You All Meet At The Inn 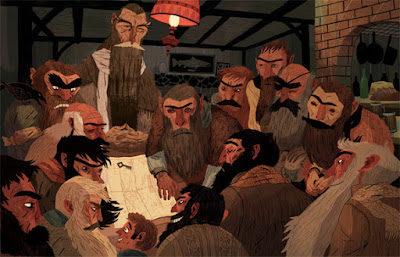 Each season begins with the PCs sharing a table at their favorite local tavern listening to rumors of what's going on in their village. The GM rolls a scenario (worrysome things + social calendar + personal complications + rumors) using the tables below and tells the PCs what's afoot during that season.

The GM rolls once or chooses from the scenarios listed below. The GM can randomly assign the scenario to one of the PCs, or chose who it makes most sense for.


Just Another Day in the Village 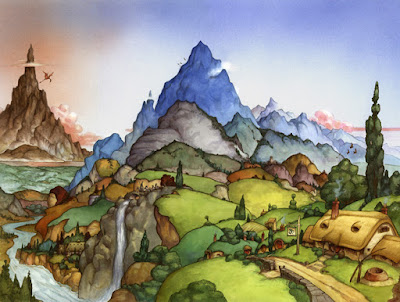 The GM rolls once for each PC at the table. Reroll duplicates.


Other Rumors Heard Round the Hearth

Of course, these issues aren't the only thing going on in your march. The GM rolls on the rumor table to generate some buzz about other threads that can be followed. To keep the rolling quick and easy for rumors, two halfling family names are given at any point it's appropriate. The GM can roll or choose the most interesting one to fill that rumor. 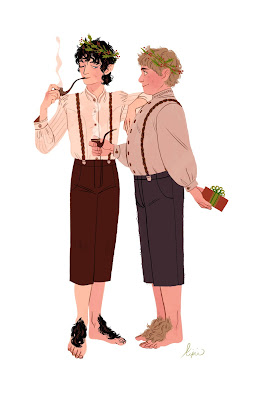 Look at the total XP you earned during the spring, summer, and autumn. For every 3 XP you gained, gain 1 rank. Then, reset your XP count to 0 (regardless of whether or not you ranked up).

Roll ([Profession rank]d10 x 10 copper) to find out how much coin your halfling made during his legitimate business enterprises during the year, + (1 silver x rank). Lessen this total if they made any in-character sales during game play. If your character owes anything to money lenders, calculate interest or pay that loan off.

If you're unhappily married, you get a new wee one on a roll of 2 out of 6.

Talk about the things your character has achieved during that year. Share a pint with friends. Make new years resolutions.

After you've completed a year of Under Hill, By Water, consider playing something else for a little while. After all, you just had three to five sessions of playing little farming folk. Maybe your table wants to do something else. Of course, you can always pick up the story again and continue a new year. You might also hold games of Under Hill, By Water as an alternative to your standard weekly game if not everybody is available.


Alright. This was fun. I think this will be my last halfling related post for a little while.
Check out the full game here!
Posted by Josh at 6:47 AM