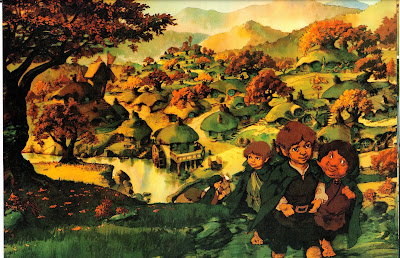 The Commonwealth lies in the Vale, a verdant valley surrounded on all sides by a high-walled mountain, through which the Pass runs. The Vale is cut by the Water, a well-stocked river that rarely meanders from its banks. The Commonwealth is divided into four marches: Eastmarch, Westmarch, Northmarch, and Southmarch. Each march boasts half-a-dozen small villages. Each march is governed by a mayor. The mayor is the head of civilian bureaucrats such as couriers, sherrifs, and bounders, but typically have enough free time to pursue their own original careers.

At the center of the Commonwealth is their capital city (really, just a largish village) called Farthington (Four-Thing Town). The thain lives in Farthington, and is the official--but mostly ceremonial--head of state. The thain is elected from the four mayors by popular vote once every six years.

Around the Commonwealth is a high hedge, called simply the Hedge, which borders the country. It is difficult for anybody larger than a halfling to crawl through the Hedge, so visitors are obliged to enter through one of the gates.

Most halflings work in some agrarian production capacity: farmers, shepherds, brewers, smiths. A few work in a service capacity: servants, tavern owners, accoutants. The halflings have some sort of almost-preternatural subconscious bend towards order. Though they never formally plan the structure of their society, they always have just enough people filling any particular niche so that everybody has a role and no job is left unfulfilled. Wizards comment on this sometimes. It's quite curious.

Mapping All PCs are from the same village. As a matter of play, use the march map to sketch out your home village and the NPCs that dwell there. 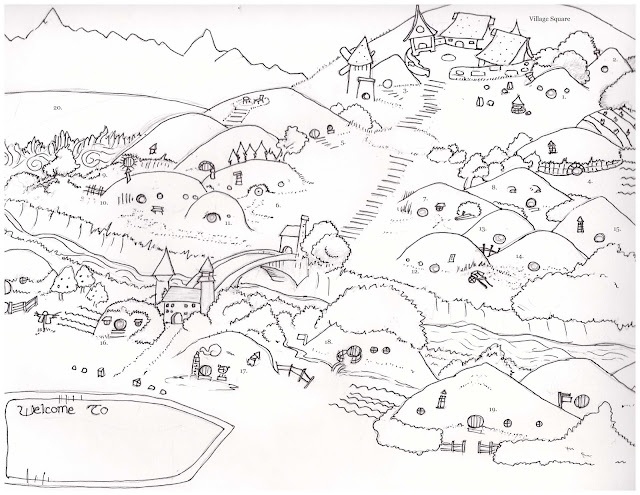 (Get full sized map here)
Choose (or roll d4) to select which march your village is in. Every halfling thinks that somebody from outside of their march is "a bit queer" and "almost a foreigner." The GM can make up what's going on in the other marches.

The map separates a march into four tiers: village, outskirts, the boonies, and beyond the hedge.

The outskirts tier lies near enough to the village that the people who live there have near neighbors, but still enjoy pastoral peace and quiet. This is in the middle of the map.

The boonies is a place for larger farms and fields, often broken up with sporadic woodlands. People who live there have no near neighbors and are more likely to encounter things from over the Hedge. This is at the bottom of the map, over the Water.

Beyond the Hedge is the wide world outside of the Commonwealth. There's some danger lurking out there. This is in the top left corner of the map. It's numbered 20.

Notice all the little holes and such are numbered. When you need to generate rumors and events, you can roll a d20 to find out who's involved. Blam.

Village
What's the march village name? Roll 1d20 twice and combine the first and second elements. Write it on your march map.

Second element:
I assume that most villages have enough halflings of any particular profession that you can find just about any trade good that the Commonwealth has to offer there.

Next, name your village pub. You're confident that it's the best pub in the four marches. Write it into an empty space in the village. Roll 1d20 twice and combine the first and second elements. 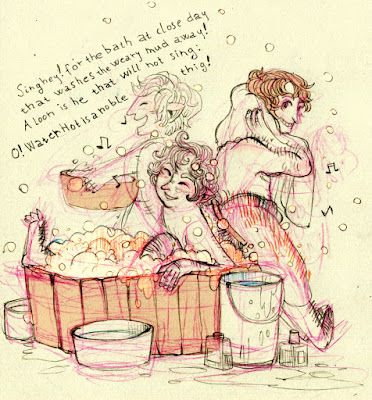 First element:
Second element:
...which is famous for their (roll 1d10):
Beyond the Hedge 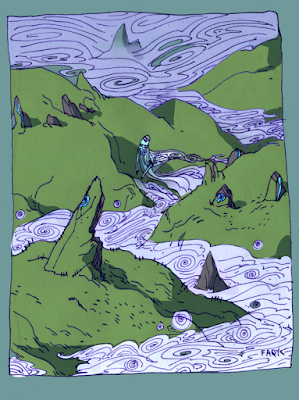 Roll on the following table to find out what strange danger lurks just outside the Hedge.

Population: You
Now that you have a sense of your march with those random tables, each PC chooses a location on the map and places themselves in an empty hole there.

Write in the name of your ancestral home. You live there.

Population: Sites and Citizens
Next, each PC takes a turn rolling a d6 and filling in one of the empty slots on the map.
Meeting Hall
One of the core facets of Commonwealth society are the communal orders that populate it. These social associations wield considerable influence in their village and in their march. If this location is rolled, the player who rolled it should roll a 1d10 and note down what society is housed there. Duplicates should be rerolled.
Tavern
Create another tavern using the procedure above. Your village is cool enough to have several taverns. Congratulations on your good fortune!

NPCs
Roll on the profession and familial name chart and pick a random name to create a random NPC. If they have the same last name as a PC, they're your relatives (probably annoying ones). Each time you create a new NPC, the PC that rolled them can describe them and their relationship with them. Put them into one of the empty houses on your march map until all empty spots are filled.

Viola. Now you have your own little corner of the Commonwealth to call your own.

Check out the full game here!
Posted by Josh at 8:48 PM