The idea that wizards are somehow wise or learned is pro-wizard propaganda in the worst way. 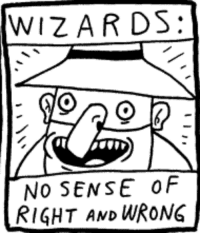 Wizards can throw fireballs but have no idea how they do it or why or if they should. These questions are answered by loremasters.

This post is a continuing exploration of non-comparable classes. See the truespeaker for the first part in the series.
The loremaster represents the wise and learned archetype in low/no magic worlds.
I've framed this class in GLoG terms because it is easy and fun to write GLoG classes. Reframe the basic idea into your game of choice. 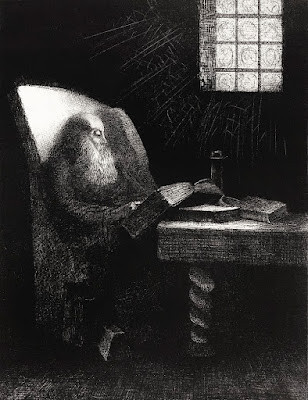 Many have marked the speed with which Muad‘Dib learned the necessities of Arrakis. The Bene Gesserit, of course, know the basis of this speed. For the others, we can say that Muad’Dib learned rapidly because his first training was in how to learn. And the first lesson of all was the basic trust that he could learn. It is shocking to find how many people do not believe they can learn, and how many more believe learning to be difficult. Muad‘Dib knew that every experience carries its lesson.
—from “The Humanity of Muad’Dib” by the Princess Irulan
The loremaster is not just well read. The loremaster trains their memory, powers of deduction, and logical thinking into nearly superhuman levels. They plumb the Akashic record through meditative trances. They send their dreams through the labyrinths of their genetic memory. This training allows them to know things that mortals should not know. They have sudden flashes of insight that they can be certain are true (even if they are not sure how).
Loremaster A - d4 Lore Die, 2 lores
Loremaster B - d6 Lore Die, 4 lores
Loremaster C - d8 Lore Die, 6 lores
Loremaster D - d10 Lore Die, 8 lores
Choose any two lores when you first choose a template. Choose two additional lores to learn each time you gain a new template in this class. You only learn new lores by progressing in the loremaster class. It's not so much "reading" as "practice using the loremaster deductive method" that reveals new lores.

My mind is my weapon. My brother has his sword, King Robert has his warhammer, and I have my mind … and a mind needs books as a sword needs a whetstone, if it is to keep its edge."
- A Game of Thrones, Grrm Wyrm
Roll your lore die each time you call on a lore. This is just a Usage Dice like from the Black Hack. Whenever you roll a lore die, if the roll is 1-2 then the lore die is downgraded to the next lower die in the following chain:
d10 > d8 > d6 > d4
When you roll a 1-2 on a d4, you're so exhausted that you can't press your brain into service. Your cloudy reasoning lasts until you get a full night's rest, at which point your lore die is refilled to its normal size.

'You see, but you do not observe. The distinction is clear. For example, you have frequently seen the steps which lead up from the hall to this room.’
‘Frequently.’
‘How often?’
‘Well, some hundreds of times.’
‘Then how many are there?’
‘How many! I don’t know.’
‘Quite so. You have not observed. And yet you have seen. That is just my point. Now, I know that there are seventeen steps, because I have both seen and observed.’
- "Sherlock Holmes & Dr. Watson, A Scandal In Bohemia," Arthur Conan Doyle
Each time you use one of these lores, roll your lore die to represent the strain to your mental faculties and exhaustion. Each lore question will be answered by the GM honestly.
Lore of Auspice
Ask the GM: "If I do X, will Y happen?" You receive a “yes, ”“no,” or "maybe" answer by interpreting the signs at hand.
Example:
Q. If I drink the fountain's water, what will happen?
A. Ah, that's not exactly how it works. You have to specify what you think will happen and I'll tell you if you're right or wrong.
Q. If I drink the fountain's water, will I turn back into an elf?
A. That is a definite maybe. The fountain's water seems random.
Lore of Eidos
You have perfect recall. You can ask the GM to remind you of anything your character has ever seen or heard. You can go back and count the beads of sweat on your mother's forehead on the day of your birth, if you wish.
Lore of How
You can use your turn in combat to shout advice to a comrade. If you do so, you can add your current lore die value to a companion's d20 roll.
Lore of Tongues
You can translate almost any language. Spend a dungeon turn to translate an inscription or rune in an unknown language. Spend a hex turn to translate an entire book or have a meaningful conversation with a willing participant who does not know a shared language.
Keep a list of the languages you've translated on your legendarium. If you ever translate the same language 3 times, you may add it to your known languages list.
Lore of What
You can always ask the GM: "Wait, what is this?" The GM will give you a name and a single sentence explanation.
Example:
Q. Hold on - what is it we're looking at here? I'm using the Lore of what.
A. It's a false hydra, actually. A false hydra is a...well...a monstrous growth that sings a song that forces it to not be noticed.
Q. What does this sword do? I'm bidding lore.
A. This is a sword of goblin bane. The runes name it Orcrist. It's +1 against goblins.
Lore of Where
If you ever hear the name of a location, you can ask the GM: "Where is that?" They will place it on the map for you.
If you ever see the stars, you can ask the GM: "Where am I?" They will place you on the map, too.
Lore of Who
After carefully observing a scene, ask the GM: "Who is responsible for this?"
If the answer is concealed, the GM gives you one meaningful clue.
If the answer is not concealed and it is at all possible that you could know, the GM will simply tell you.
Example:
Q. Who murdered this person?
A. Well, you can definitely tell that trollocs murdered this person. But you also see familiar arrows used - the arrows of the fletcher Cenn Buie. Either the trollocs bought or stole these arrows from him.
Q. Do I recognize who made these ruins?
A. You actually see two influences - and older one and a younger one. Which one do you want to look at?
Q. Both please. I'll roll my lore dice both times. [clattering]
A. OK. The oldest ruins are dwarvish in origin. There's a new layer of construction on top of these ruins that are of goblin make. Plastering over and ruining the dwarvish art, a thin architecture of shoddy simple traps, etc.
Lore of Why
If you are talking to an NPC about X subject, ask the GM: "How do they feel about X?"
The GM will answer you with one of the following phrases:
Example:
Q. OK, we definitely just mentioned King Abaslom pretty directly while talking to Vizier Malcomb. Can I tell how they feel about him?
A. Yes, if you roll. [clatters] Thanks! OK. The vizier feels angry at King Abaslom. Your senses tell you the anger borders on contemptuous.
* I actually think there's good evidence for many wizards in Middle-earth, but that's a galaxy brain take I don't have the space to justify here.
Posted by Josh at 7:16 PM