Trickster - an OSR class that can steal *anything*

Continuing my series about incomparable classes. As before, I've framed the rules here into a GLoG milieu but you can steal the basic concepts pretty easily.

If it's not, like, super apparent - the Trickster uses portions of another person's character sheet for a little while. 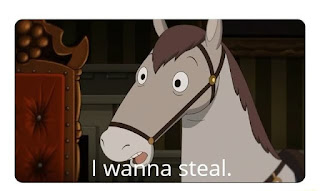 You're a magic user. Most of your abilities are identical to the core wizard class. The only difference is your Prime ability.

Your magic steals. This is how Mother stole fire.  This is how gaps entered the historical record.

You begin the game with 6 random spells. You learn more magic as you level up (per normal wizard). You can also learn new spells from foxes, if they existed.

Whenever you cast a stealing spell, mark down the target on your legendarium. You do not have to touch the target use this theft again.